Finding balance to create a lifetime of adventures.

The past few weeks have been some of the busiest of my entire life. Between work and getting ready to graduate with my Master’s degree in May, I was starting to feel pretty burned out. When this past weekend came around and it was time for a road trip with my favorite person, it could not have been at a more perfect time. And what better way to rejuvenate the soul than with sand, sun, and the sea??

The last time I was in Fort Bragg was when I was a little girl. It is an easy 5 ½ hour drive from Lake Tahoe and now I am wondering why I haven’t explored there more. We got out of town around 8:30 and the wildflowers and green hillsides of California made for a beautiful drive the entire way. As we started to get closer to the coast and entered the Jackson State Forest, the landscape turned to second growth redwoods that are absolutely breathtaking.

Once we made it out of the redwoods and onto the coast, we headed for MacKerricher State Park. Here, they have abundant camping for both tents and RVs and you are only steps away from the beach. We found a nice little campsite (#30) that had quite a few trees around it and provided privacy from the neighbors, so we never felt like we were ever right next door to someone…minus the crazy guy a couple of sites away who would just start randomly singing, but that’s another story.

That first night, we  grabbed some beers, headed down to the beach, and did some exploring. The beach at MacKerricher is absolutely beautiful. You could walk for what seems like forever and there are lots of tide pools to check for little critters. 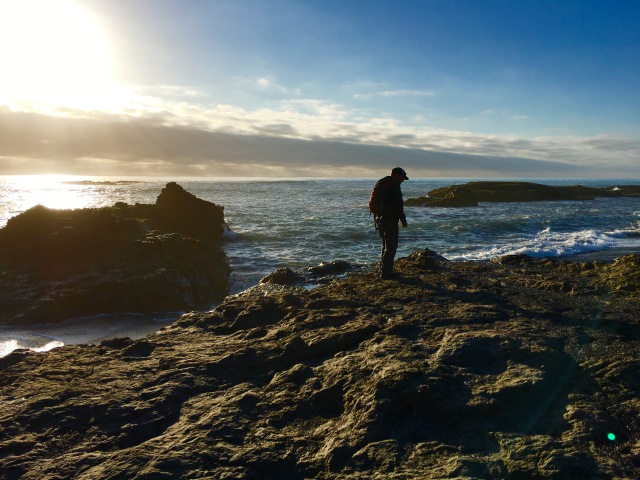 Exploring the tide pools at MacKerricher

We also saw some sea lions. Or maybe they were seals. I don’t know. It was hard to tell if they had ears or not from the distance. Fun fact: Sea lions have visible ears and seals just have little holes in their head. Anyways, we also saw a gray whale spouting at sunset. It must have been feeding on some good grub. Turns out we just missed the annual whale festival at MacKerricher where you can listen to experts talk all about their migration patterns and other cool stuff. If you are going to MacKerricher in March, make sure to check it out! 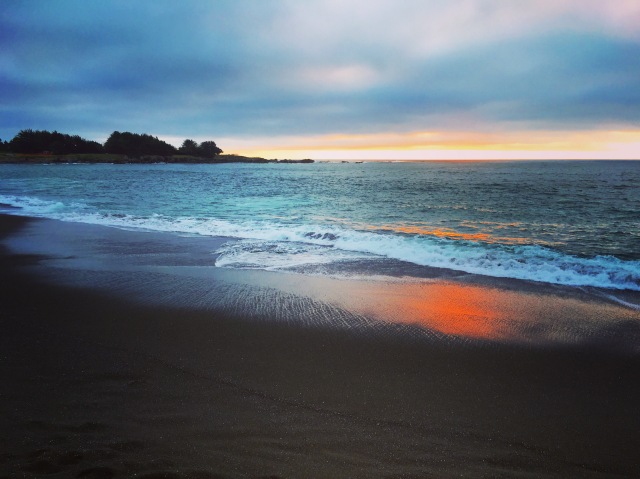 Riding bikes along the bluffs from MacKerricher into downtown Fort Bragg

We stopped along the way, found some more tide pools, saved a little eel from suffocating, and eventually made our way to Glass Beach. This is the one place that I remember the most about visiting Fort Bragg when I was a little girl. 20 years ago, I was burying my dad in mountains of sea glass. Although a lot of the glass has “disappeared” from greedy tourists, it is still a must-see when you are in Fort Bragg. Just don’t take all the glass and make sure to leave some for future generations! 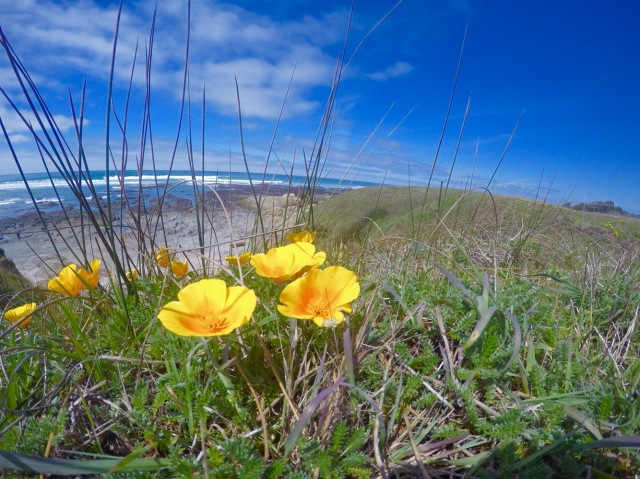 Lots of beautiful wildflowers this time of year along the bluffs

After glass beach we rode our bikes to North Coast Brewery where they have about 15 beers on tap. Most are theirs and they are delicious. I would definitely suggest checking out the tap room while you are there. The bartender also suggested that we check out another place that has 32 beers on tap, since we were on a mission to find our favorite, a sour beer. If you have never had a sour beer, you will either love it or hate it. We went to the Sea Valley Café and struck out there, although they did have an impressive list of beers. There, we started up another conversation with a local who suggested we go to a little pizza place called Piaci’s. The owner is a beer connoisseur, and as we soon learned, also loves all things sour. Score! They had one of our favorites, Almanac in 10 different varieties… and even on tap! Double score! Aside from the place being really small and definitely playing more toward the locals, we had a great time and even went back for some delicious pizza the next day. 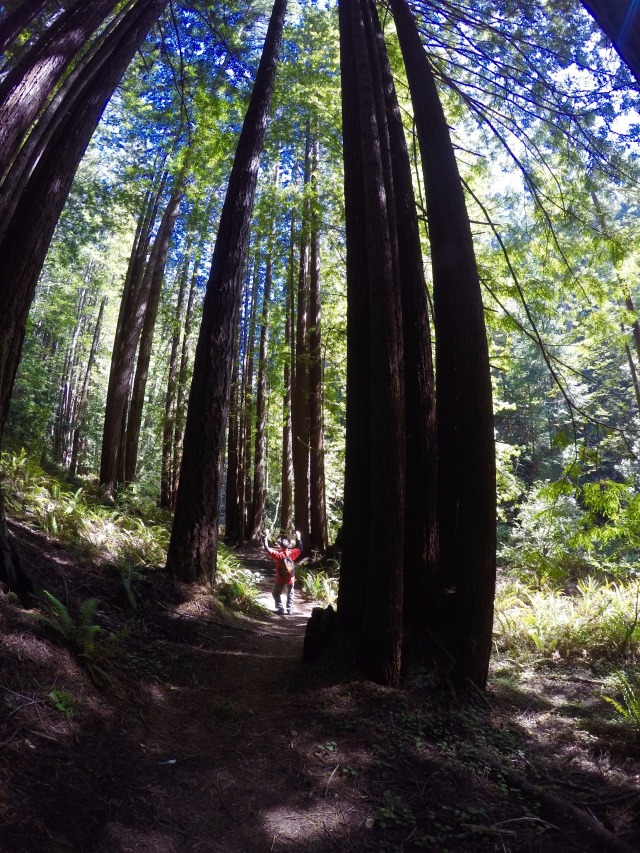 Walking through the redwoods in Fern Valley

That next day, we took some advice from a local that we met at the Sea Valley Café the day before and found an incredible trail for a hike. The trail is located in Van Damme State Park (just South of Mendocino) and we will definitely be coming back here. When you enter the campground at the park, stay right and drive to the end of the road. Here, you will see the trail head for Fern Valley Trail. There is a five mile out-and-back path that is relatively easy and you could go further if you like. There are also primitive campsites about 1 ½ miles up that we might backpack (or ride bikes) into next time. No one was staying at any of the primitive sites when we hiked by. 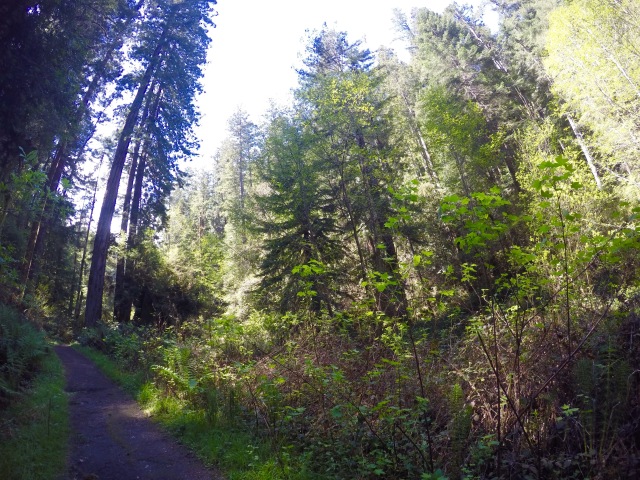 The Fern Valley Trail follows a river the entire way and is lined with redwoods, oak, pines, and, well, lots of ferns. It was absolutely beautiful. We were lucky that the weather was gorgeous, because I could see this trail being a muddy mess if it had recently rained. I don’t know what else to say about this trail other than you have to check it out yourself. Words and pictures will not do it justice. In total, the hike took us about 2 ½ hours, and that included lots of stopping to check things out and take pictures. 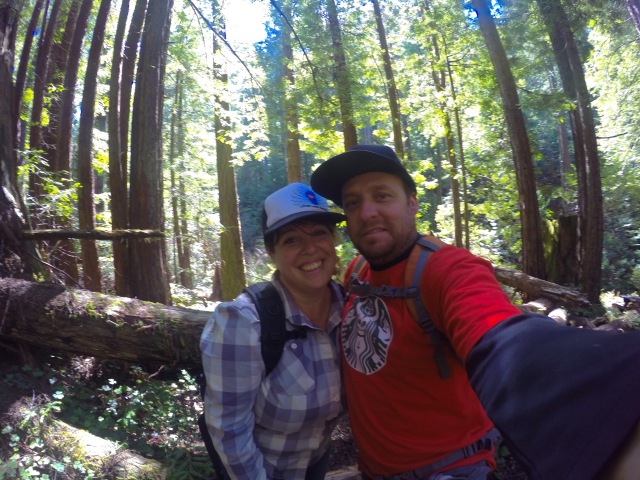 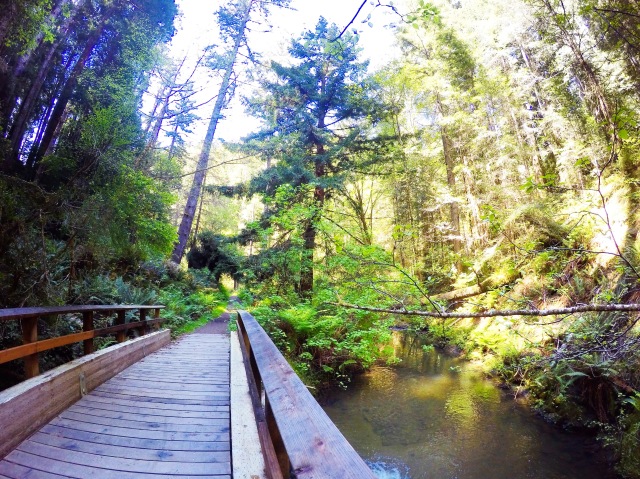 One of the many bridges in Fern Valley

That afternoon, we managed to squeeze in a round of disc golf at the College of the Redwoods. They have a 14-hole course and it is pretty fun, even if it is tucked back into the mainland. We were hoping to be able to see more of the ocean from the course, but that’s okay. I am sure my disc would have ended up in the waves if that was the case.

That night we cooked some hobos (aka throw anything and everything that sounds good into some tinfoil and let it cook on the campfire) and played some Yahtzee. It was about mid-game that Brian went to “go find a tree” and ended up making friends with a little black and white stinker. The two nights before we had raccoons, so when he shined his light on whatever was making noise in the bushes five feet from him, he was not expecting to see Pepe Le Pew. Haha. Lucky for us (or should I say lucky for Brian?), he was into something in the ground and could care less that we were there. Funny little skunker. 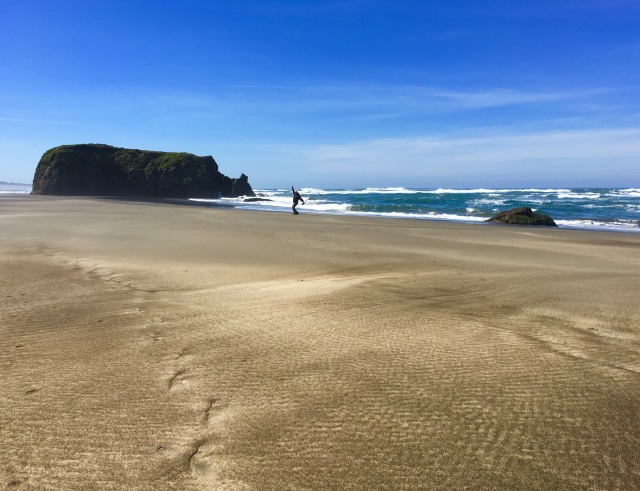 The last morning, we wanted to get up and all packed by 11:00 so we could checkout one last beach on our way out of town. We went North on Hwy 1 a few miles to Seaside Beach. This beach is beautiful, with big rock formations, and lots of white sand. If you have dogs, they are allowed on-leash, but must be kept on the North side of the river. The main reason we wanted to go to this beach is because it is known for the sand dollars that wash up on shore. Make sure to go at low tide and head South toward the river from the parking lot. We found lots of sand dollars and pieces of sand dollars in the river and surrounding areas. If you are brave enough to wade through the river, you can also find some on the sandbar. 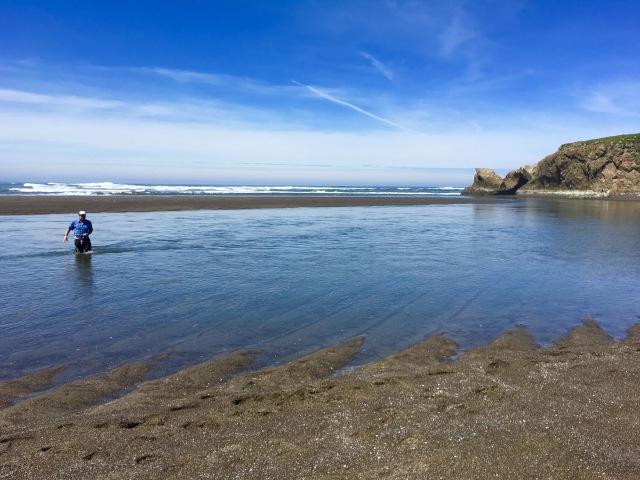 Crossing the river to the sandbar…it gets tits deep!

Collecting sand dollars is a no-no, so we made sure to put all of ours right back where we found them. I hope you do, too. 🙂 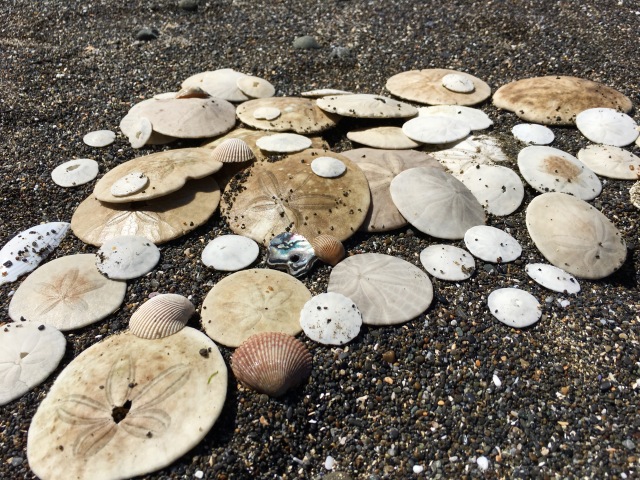 After spending a couple of hours at Seaside, it was time to head home. I was definitely not looking forward to coming back to reality today, but am glad that I have so many great memories from a wonderful weekend. We want to make it a point to explore more in the redwoods and on the Northern California Coast this year. What are some of your favorite places in this area? Leave a comment below. Thanks!

Thanks for stopping by and checking out what I think makes life so fun--adventuring! Whether it be on a mountain trail, in the kitchen with a new recipe, or on a long road to somewhere new, this little blog is my way of sharing what I love, and I hope you love it, too. Happy adventuring!

I’ll share my trail snacks with you any day.
Oh, Big Blue, how I’ve missed you!
The past couple of months have seriously tested my resilience with my dad’s passing, COVID, and other life things. Being in nature and disconnecting has never called to me so loudly—maybe more like screamed at me.
Who else saw the lunar eclipse and blood moon last night? Yeah. Me neither.
I woke up like this.
We’ve always been curious what makes our furry boy so special, so we decided to do a DNA test. Turns out, he’s not as much of a wonder mutt as we originally thought. Now that we know what he is, his qualities all make so much more sense. Swipe to see the results. 👉🏼